Fixing Food with a Framework 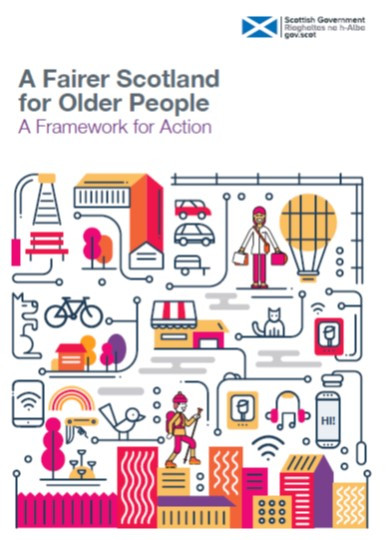 Earlier this month saw the publication of the Scottish Government’s new Framework for Older People[1], and I was chuffed to bits to see a half page section on tackling and preventing malnutrition, with a firm “we will” commitment. It may only be a small section, with a commitment that’s open to interpretation, but it feels like a success of great magnitude that has taken years to achieve.

The campaign to tackle malnutrition and improve food access and food provision for older people is not a new one, and not one specific to Food Train, but we have been at the forefront of campaigning for many years.

Exactly 24 years ago, a group of older volunteers in Dumfries were in the last stages of 2 years work setting up a small charity in the town to make sure older folks didn’t go hungry because they were struggling with their food shopping. They had spent months walking the streets, door knocking, talking to older folks, asking ‘what would make your life easier’. They were astonished to learn how many were struggling to food shop and how they were adapting to cope. This adapting really meant eating less, going hungry and ultimately losing weight unnecessarily. Cutting out fruit and veg that was too heavy to carry, swapping nutrient rich fresh things for lighter weight packet goods, forced to use a local shop that had limited grocery items but plenty choice of cigarettes and alcohol, or leaving a shopping bag on their door for a passing mobile shop who charged so much for each item they could only afford a few things each week. The volunteers had originally thought that passing on what they’d learned to the Council, would have led to more help being made available, but when that didn’t happen, they took it upon themselves to help their friends and neighbours who were going hungry, with their very own “we will” commitment.

When I first joined Food Train in 2002 there was plenty of evidence that the campaigning spirit that brought the charity to life, was ongoing and ramping up the pressure. Countless letters sent to various politicians in Scotland and Westminster urging them to make sure policies relating to older people included access to food via shopping, meals and help to cook if needed. Meeting after meeting attended with Food Train volunteers speaking with the voices of the older people they helped feed each week.   As the years have passed, we have joined forces with others, campaigning with a stronger and louder voice, the message unchanged. The Malnutrition Summit of 2015[2] felt like the pinnacle of all the campaigning, but the wheels of public policy don’t turn as fast as the Food Train delivery van wheels, so it’s been another 4 years till the publication of the new Framework.

Many of the volunteer campaigners of Food Train’s early days are no longer with us, but I like to think the essence of their “we will” spirit is woven into page 23 of this new framework. It’s up to us all now to turn the good intentions into good actions so the current and future generations of older people eat well in later life.

No comments made yet. Be the first to submit a comment

By accepting you will be accessing a service provided by a third-party external to https://www.thefoodtrain.co.uk/